Hate has found a home at LHS 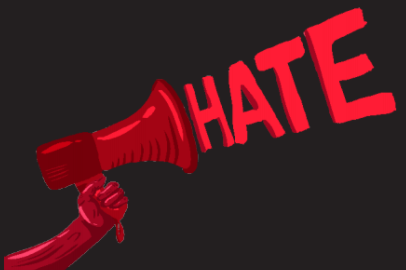 Note: This piece is a staff editorial, which is an opinion article meant to reflect the opinions of the Drops of Ink staff. Because of this, the author’s name does not appear alongside the story, as the opinions shared in here are based on class discussions about the topic among 39 DOI staff members. The staff is composed of students of all grades from a variety of backgrounds and experiences; therefore, the editorial speaks to the publication’s view on a subject and is not representative of each staff member’s exact view on the issue at hand.

As an individual strolls the halls of LHS, they will be met with countless posters proudly declaring “Hate has no home here.” Unfortunately, though, hate has found a home at LHS. Not only that, but hate has become embedded into the school’s culture. LHS has allowed its students to create a culture that fosters and normalizes the use of offensive and hateful language.

In what form does hateful and offensive language exist at LHS?

The use of offensive and hateful language is a problem that exists in every part of the school. Racial slurs, religious hatred and the use of the R-word are most frequent amongst friend groups when out of earshot of adults. Individuals within these friend groups often utilize slurs such as the N-word in order to be “funny” or “act cool.”

One location that is a recurring cesspool of hateful and offensive language is the cafeteria. With an abundance of students and high volume levels, it is simple for an individual to slip in a hateful phrase without being heard by a large audience.

Not only is offensive and hateful culture common on the LHS campus, but it also carries into students’ activities outside of school. Party culture in Libertyville is another home of hateful language. For example, some students feel they are able to scream out the N-word in party settings.

This use of the N-word should always be considered hateful. This word’s dehumanizing nature should cause anyone who hears it to feel serious discomfort.

Religious hatred is also prevalent at LHS, especially against the school’s Muslim population. For example, a student recently recalled a time they were told that they were personally responsible for the death of someone’s cousin during the 9/11 terrorist attacks.

Why does offensive and hateful language exist at LHS?

It is difficult to understand why a person might feel compelled to say words that they know are hateful and hurtful to entire communities. However, there are a number of factors that give LHS students the license to spread this hate.

In recent years, hateful and offensive language has been normalized due to a variety of outside influences. For instance, the crude and hateful rhetoric of President Donald Trump has made individuals feel that it is OK to engage in certain offensive language.

Rap music has also had an impact on the frequent use of the N-word amongst Libertyville teens. In rap culture, the N-word is frequently utilized by Black, and some white, artists alike throughout song lyrics. As a result, many teenagers in Libertyville use rap as an excuse to utilize this disgusting racial slur.

Regardless of the basic expectation of individuals not to use the N-word, this word is still used by those who lack understanding and empathy for those who are directly harmed by its use. This failure to empathize, and its accompanying ignorance, implies that the use of the hateful word may sometimes be a result of misinformation or lack of education, instead of as an act of hate. Yet ignorance and lack of education are not the strongest justifications for why hate language remains at LHS.

How can students of District 128 — the No. 3-ranked school district in the United States by Niche.com — lack the education to know the hate and oppression associated with the N-word? The answer is simple. We do not lack the education necessary to know the meaning behind the word and the disgust associated with its use. LHS students have been taught U.S. history countless times over before they even attend their freshman orientation. LHS students are educated enough to know which words are hateful and which words are not.

What can we do better?

There are multiple solutions that would result in the elimination or mitigation of hateful and offensive language and culture at LHS. These solutions include a call for behavioral change and a stronger anti-hate message from the school district.

Those in the LHS community need to root out hateful language before it has the chance to be spoken or spread. Students must stick up for themselves and others when they hear or experience hateful language or culture. We, the Drops of Ink staff, also continue to commit ourselves to practicing this behavior.

LHS as an institution has made some positive strides in facilitating inclusivity and diversity. Clubs such as the Gender-Sexuality Alliance and Students Supporting Equal Rights give students the opportunity to voice their advocacy for equity and fair treatment. Despite some very positive efforts to combat discrimination, Libertyville High School and the school district as a whole are very passive when it comes to anti-hate messaging.

The District 128 Student Handbook cites that bullying on the basis of race, sexual orientation, gender identity, religion, and disability — among a list of 14 other offenses — is strictly prohibited at LHS. The punishment for such bullying is determined on an individual student level, in accordance with Illinois law SB 100, which limits harsh punishments or “zero-tolerance” policies. As a result, there are no specific repercussions for those who engage in hate speech at LHS. The level of punishments for hateful actions depend on the perception of how egregious the actions were. This leaves the door open for students to face tamer punishment — or potentially no punishment — in the case that they are caught using hateful or offensive language. There must be clearer and more specific consequences for those who spread hate at LHS.

Even though the District released an anti-hate statement this past June, they have since failed to follow up on the statement with any action. The recognition of hate in District 128 is a step forward towards equity but has little meaning without any actions tied to it. We know the Board of Education has been working on efforts to combat racism and promote equity. However, no new information has been communicated to community members about this effort throughout the past six months since the statement’s release.

Specific action from the District has the potential to eliminate the hateful culture that has been allowed to fester at LHS. These steps are critical as we begin the process of healing for those who have been hurt due to the hateful language and racism that plagues LHS.