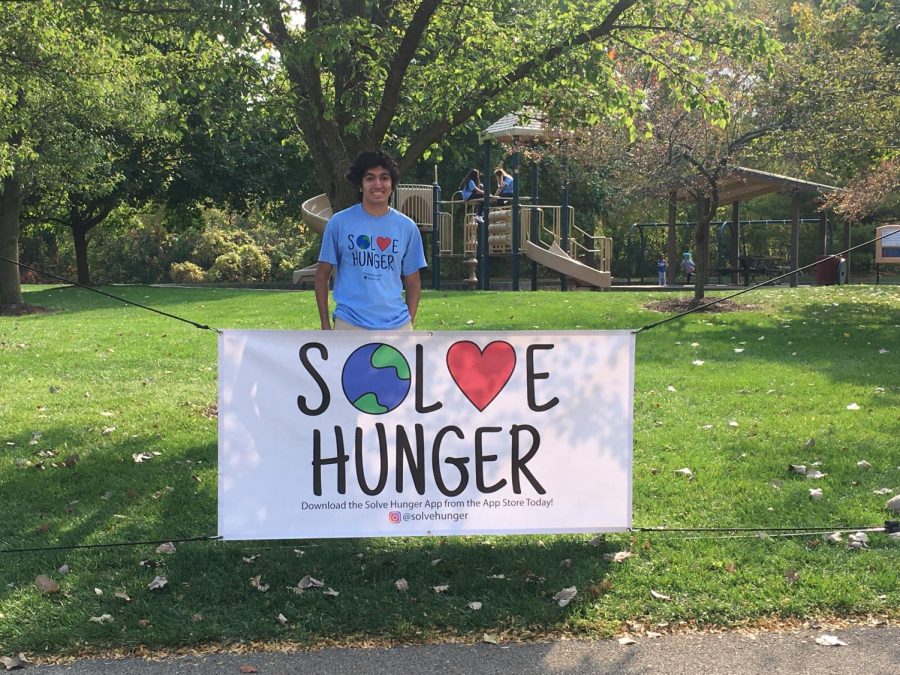 Photo courtesy of Tavish Sharma The Solve Hunger logo was designed by Sharma’s younger sister. The globe represents Sharma’s goal to help families across the world have access to food, and the heart represents the idea that the project is done through love and kindness.

The COVID-19 pandemic has affected many families across the United States, sometimes leaving them jobless and without a source of income. Oftentimes, these families may struggle to put food on the table, and many rely on food banks for their daily meals.

At the start of the pandemic, in March and April, 1.9 billion meals were collected by food banks nationwide and distributed to those in need, a 20% increase in meals donated to food banks and in volunteers than seen in previous years, according to Feeding America. In Illinois specifically, 1.3 million people struggle with hunger on a daily basis and 363,900 of them are children, according to Feeding America.

In order to combat hunger in the Lake County area, Libertyville High School junior Tavish Sharma recently created a nonprofit organization, Solve Hunger Corp, to help the less fortunate by trying to make sure no one goes hungry.

From a young age, Sharma loved to spend a couple hours every weekend volunteering at local food banks, such as the Illinois Food Bank and Feed My Starving Children. Once the coronavirus pandemic struck, he saw food pantries struggling to replenish their items and decided to take initiative by running his own food drives in April.

“Food is a hard commodity to come by these days for many people living in impoverished neighborhoods, so I really thought I could do something,” said Sharma.

With help from LHS students and community members, Sharma raised more than 2,000 pounds of food during his food drives in the spring and realized, “we have so many [community] members that were willing to help [donate food], but there was really no way to reach them and everyone [else] throughout the area.”

He decided that he should make a platform for everyone to have a common place to look for and host their own food drives.

Launched this past July, Solve Hunger Corp’s main platform is a website — solvehungercorp.org — and an app, which Sharma programmed over the past six months. The app, named Solve Hunger, is designed to “help food banks have a platform to reach our community,” explained Sharma.

The Wheels for Meals food drive in October was the launch event for the Solve Hunger app. Sharma decided to get his neighborhood involved by publicizing the app through their neighborhood Facebook group. Families then downloaded the app and signed up for shifts to help collect food around the neighborhood.

“People kept non-perishable food [items] by the end of their driveways, and we divided the whole neighborhood into two loops because there were younger kids who couldn’t cover the whole neighborhood,” said Ruchika Sharma, Tavish’s mother. “It was a very fun event. It turned out to be a good day, good weather and people were very excited.”

Children arrived on bikes, wagons and strollers to collect cans in small backpacks. Once their packs were full, food drop-off stations were scattered around the neighborhood, and everything was eventually brought to Sharma’s house.

“It was more of a creative way to have a food drive and get everyone involved,” expressed Sharma. “We had a lot of people come and support the cause, so I was really happy with that.”

“It’s a good deed and it feels good giving back to the community, especially in a pandemic,” said Trigg.

A couple days after the food drive, Trigg and Sharma dropped off 4,000 pounds of food at St. Joseph’s Food Pantry and the Libertyville Township Food Pantry.

Junior Josie Liu helped collect food in the trunk of her car during the food drive. “Tavish is really smart. He coded an entire app and did a lot of research to do that. He is also very hard-working and one of the most focused people I know,” she explained. “I was very happy for him and wanted to do anything I could to help.”

Sharma began creating his nonprofit by learning how to code the Solve Hunger app and by designing the website on Wix. “The biggest obstacle,” he explained, “was probably the app-building process. I had never gone through it. It was a new process for me.”

One of his biggest challenges was getting the app published to Apple’s App Store. “They have a lot of strict regulations. They go through a lot of third-party services, so getting through all of those [obstacles] was probably the toughest part, and it definitely took the longest [time],” Sharma stated. “It was probably a month-and-a-half struggle with them because [Apple] takes a long time to get back to you. Some of the fixes take a while [to finalize], so it was a long process.”

The Solve Hunger app has five tabs for its users. The home page “is just a place for food banks and me to display news feeds and it’s swipeable for our users. It’s just a way to get information out quickly,” said Sharma. “There’s also a volunteer tab, which allows food banks to put volunteer shifts up on the app for everyone to see, and it’s a great way to sign up and go to the volunteer shifts because you just click a button and you’re signed up.”

The donation feature on the app enables users to donate money and food. Local food pantries have the option to post lists of food they need, so users can look to see if they have those items at home or go out and buy them.

Any user can host a food drive through the events tab, “which is a great way for our volunteers and our community to (…) collect food from their neighbors and donate it to the food pantries in their local area,” said Sharma.

“Tavish is a very social person. He loves connecting with people and is good with his studies” said Mrs. Sharma.

Added his father, Paritesh Sharma: “He’s always had philanthropic ideas from a young age to connect with the community and do stuff for others.”

Sharma encourages everyone to get involved with Solve Hunger: “The most important thing [people can do to help] would be to download the app (…) and if you can make an account, that would be amazing.”

Additionally, tell people “to keep spreading the word [about Solve Hunger] because that’s how we’re going to make a difference,” he said. “I would be so grateful to anyone who would help me achieve my dream.”