Despite some positives, e-learning cannot replace the real thing 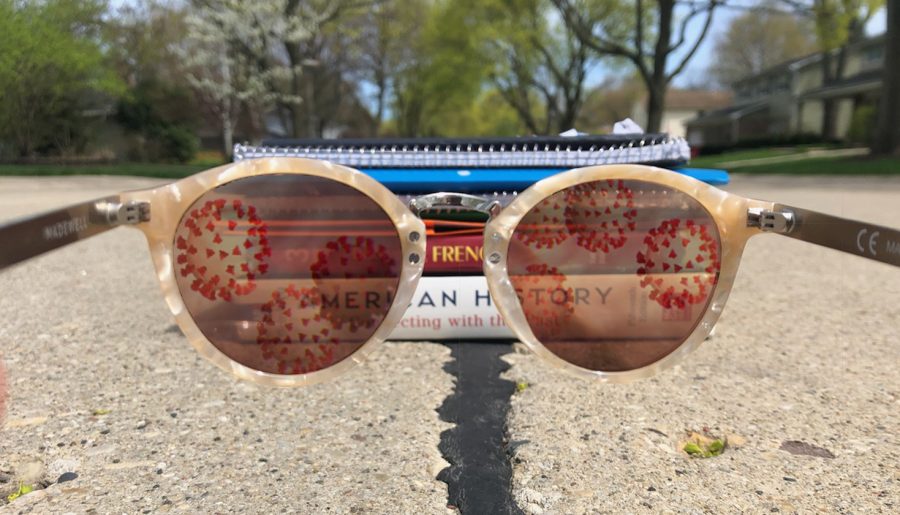 Molecular COVID-19 photo via the U.S. Army Drops of Ink staff members have found a new appreciation for in-class learning with their teachers and classmates amid the struggle of trying to stay motivated and focused during e-learning. The staff feels that after quarantine is over and students return to school, many will have a new perception of school and of their relationships with teachers and peers.

The world is always changing, but amid a global pandemic, changes in every aspect of life have been amplified and felt more strongly across entire populations. Education is no exception.

As Illinois and many states across the United States extended stay-at-home orders and cancelled in-person schooling for the rest of the school year, e-learning became the new norm.

Despite the best efforts of educators, we believe that in its current state, e-learning is an insufficient substitute for real classroom experiences. We acknowledge that in such extreme circumstances, we are fortunate to even have the technological resources and effort on the part of teachers and staff to make finishing the school year possible.

However, in the present, we do not envision virtual schooling to become anything outside of a temporary solution. While an increasing amount of technology has been incorporated into education in recent years, up until this point, online devices have been supplementary. The introduction of Google Classroom, Mastery Manager and other educational tools accessed through student Chromebooks did little to change the atmosphere within a physical classroom.

Prior to the COVID-19 pandemic, a typical school day for all LHS students looked pretty similar. School started at 8:45 (with the exception of people taking early bird and zero hour classes), and students were dismissed at 3:25. Class periods lasted between 45 and 68 minutes, and the Monday through Friday schedule remained fixed.

Now, each individual student determines how they use their time. There are some who get up early and are able to get most of their work done by noon and others who have essentially gone nocturnal and are not even awake until late afternoon. There are some students in classes who take far less than the recommended 30-40 minutes to complete their assigned work and others who are spending close to three hours on the work for a single class. Even the platforms that students have been utilizing vary.

Several inconsistencies can be attributed to the sudden and unpredictable effects of the outbreak. However, the Drops of Ink staff believes that regardless of how e-learning is implemented, a greater amount of responsibility ends up getting placed on students. Generally, at-home learning has tended to decrease our motivation instead of forcing us to take charge of our own work.

There are several limitations to using the internet. Class discussions are difficult to organize, and even when many people are able to attend, mass video calls are not conducive to real conversation. Activities that involve group collaboration or more complex instruction are also near impossible to implement outside of an actual classroom.

As a result, the work that is assigned starts to become repetitive, and rather than learning, we feel like we are merely passing time with busywork. We are more motivated to join things like video lectures and office hours because they resemble in-person classes. However, the lack of ability to compel students to actually do things has made it that much more difficult to stimulate active participation in school-related activities.

Given the unique nature of the situation, it is more than appropriate for the state to have put a “no-harm grading” policy in place. Everyone’s life has been affected differently by the pandemic. Since it is impossible to understand what each individual may be going through, we agree that any grades received since schools first closed should not count against a student.

However, the Drops of Ink staff holds that even if “no-harm grading” was intended to shift the focus away from grades and onto learning, it has often had the opposite effect. Especially if someone was doing well in their classes before being put into quarantine, they feel that there is less reason for them to put in any effort. Additionally, if someone was not putting in much effort to begin with, the structure of e-learning (or the lack thereof) does little or nothing to push them in the opposite direction.

Even if this policy were to be brought into a more “normal” educational environment, we postulate that the sole goal of learning would unfortunately not be enough to drive most students. In fact, we feel that our experiences with virtual learning during a pandemic will do little to alter the fundamentals of our education system as it stood before.

Responses to various challenges faced by students in different grades seem to be the exceptions, not the new rules. For students whose college visits were cancelled before they made their final decisions, solely using online tours and driving to empty campuses will likely be unique to this year. The inability of many students to take standardized tests may cause colleges to shift towards becoming test-optional, but it is doubtful that tests like the SAT and ACT will be permanently eliminated from consideration. AP testing will probably revert back to longer paper exams instead of 45-minute online exams.

While there is the potential to improve upon virtual learning and include certain features into education going forward, we believe that the biggest thing that will be altered in the foreseeable future is our perception of school. Being forced to suddenly learn in isolation has revealed the importance of interpersonal relationships in the educational process. We have a newfound appreciation for learning from both our teachers and our classmates every day.

Thanks to the internet, we live in an era where we are more connected than ever before. However, while social distancing, we have come to realize that in-person interactions are an invaluable experience that there is no virtual replacement for.