The Houston Asterisks? The Baseball Scandal of the 21st Century 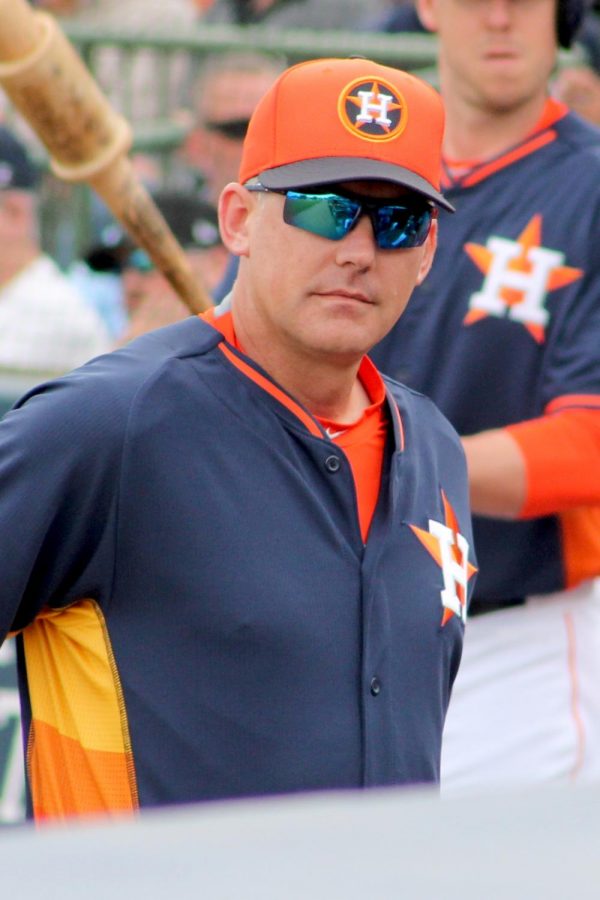 Former Astros manager A.J. Hinch was fired by the Astros organization shortly after being served a one-year suspension by Major League Baseball for his involvement in the sign-stealing scandal.

In November 2019, former Houston Astros pitcher Mike Fiers revealed to The Athletic, a prominent sports website, that the Astros had used sign-stealing tactics in 2017, a year in which they won the World Series. After a subsequent investigation conducted by Major League Baseball, the Astros received yearlong suspensions for their general manager, Jeff Luhnow, and team manager, A.J. Hinch, who were later fired. Despite these initial punishments, anger has continued to arise over the scandal within the outside and LHS baseball worlds.

According to Sports Illustrated, the MLB investigation found the Astros guilty of using technology in order to steal signs from opposing teams throughout the 2017 regular season and postseason. The Astros were found to have improperly used their replay room and video monitor. Astros personnel would watch for the catcher’s signs through the video monitor and then use sounds to notify the Astros hitter about which pitch was coming. For example, Astros personnel would hit large garbage cans when the opposing team would throw an offspeed pitch, letting the hitter know what type of pitch was coming. Along with the suspensions handed to the Astros’ upper management, MLB commissioner Rob Manfred fined the Astros $5 million while also stripping the team of their 2020 and 2021 first- and second-round draft picks.

Despite the punishment the Astros have faced, many in the baseball world feel that this is not enough. LHS pitcher Chris Potter, a junior, claims that the Astros’ “[World Series] title should have been taken away.”

Furthermore, Potter also believes “that some of the players should have been suspended.” However, no Astros players will face any serious repercussions from MLB because of their participation in the investigation. It is also worth noting that according to CBS sports, Manfred would have liked to punish the Astros players but granted them immunity in order to have all the correct facts for the investigation.

LHS world history teacher and baseball head coach Matt Thompson believes that there was a reason no more significant punishment was given to the Astros by the MLB: “The commissioner [of the MLB] is in a tough spot because there was no rule put in place,” said Mr. Thompson. Although there was no formal rule addressing sign-stealing, MLB teams were warned in 2017 by Manfred that serious consequences would await teams that used technology to actively steal signs from other teams. One of these consequences would be loss of future draft picks, according to Sports Illustrated.

Coach Thompson also noted that another serious scandal, involving former MLB player and manager Pete Rose, resulted in more serious punishments because there were established rules against betting on baseball at the time, which Rose was found guilty of. However, there are currently no rules against any forms of sign-stealing in the MLB, which Coach Thompson does believe needs to be “readjusted.”

The Astros scandal also raises ethical questions about the role of sign-stealing in baseball as a whole and if it should still be tolerated. Potter believes that sign-stealing can still be “a part of the game.” He thinks that there are still fair ways to steal signs without using technology like smartwatches or cameras. These sentiments are also shared by Coach Thompson.

Coach Thompson understands that opposing coaches try to pick up LHS signs during games at all times. He has grown accustomed to this and has adapted to these changes.

“[Our] players will look for stuff and if there is something that can tip [them] off, we’ll take it but would certainly never cross the line,” he added. The line Thompson refers to is the use of technology, which he believes could potentially be used at the high school level through apps that recognize patterns.

However, for the time being, Coach Thompson’s experiences as a coach and a player with sign-stealing have not crossed this “line.” For example, as a former player at Northwestern, Coach Thompson recalled a teammate recognizing the signs of the opposing team, Indiana University. This use of “fair” sign-stealing helped Northwestern to win that game.

Moving forward throughout the 2020 season — which is delayed at least two months because of the COVID-19 pandemic — the Astros will most likely be facing significant unpopularity among opposing teams’ fan bases, which was seen during spring training. According to CBS, the Astros’ first spring training game versus the Washington Nationals on Feb. 22 featured many boos from fans directed toward Houston and physical signs with phrases, such as “The Houston Asterisks.” It implies that the Astros should have an asterisk next to their World Series title due to the allegations against them.