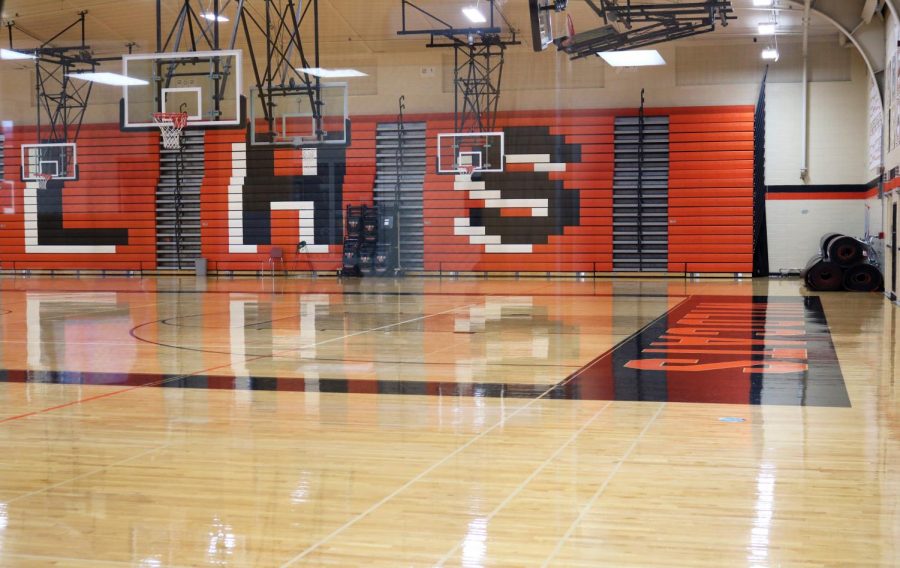 The main gym was closed for a second time after an inspection held on Friday, Nov. 15, where lead paint was found in specks falling from the ceiling. The closing of the gym affected many if the winter sports practices and events.

Following a routine inspection of the main gym on Friday, Nov. 15, lead was again found in paint specks falling from the ceiling — which also happened in the spring — and the gym was immediately closed before reopening on Dec. 2.

An email was sent out on Nov. 15 to to notify students and staff of the main gym closure.

“As soon as we knew that there was [lead] paint [problems] in the main gym, we shut it down to make sure everyone was safe,” explained John Woods, the athletic director.

After an emergency meeting on Nov. 20, the Board of Education decided to give “$75,000 for all costs related to removing existing ductwork and then painting under the removed ductwork. Additionally, under the same emergency provision, the Board authorized the expenditure of up to $100,000 for all costs related to replacing the existing ductwork,” according to an email sent out by the district.

Last April, the main gym was closed when it was found that the paint falling from the ceiling contained lead. The gym closed for a week to remove the areas that were cracking on the metal air ducts.

At that time, the lead paint chips that were flaking in certain spots were scraped and removed, and it was thought that that would clear the issue. Lead paint is only dangerous if ingested, so the lead paint that did not chip off was not an area of concern at the time.

However, new peeling and chipping was discovered last month due to the continual expansion and contraction of the metal ductwork.

In an email sent out on Dec. 1, District 128 Superintendent Dr. Prentiss Lea gave more insight on the process itself, explaining that there are three phases in the process of removing the lead paint and abating the gym entirely. It explained that the new ductwork has not arrived in the main gym yet but will be installed over winter break. He said there will also be further investigations into the painted ceiling panels and exposed steel support beams.

The closure of the main gym affected sporting events and practices of winter sports for two weeks, with Thanksgiving break helping to give more time for workers to finish the repair job.

When the gym closed, Mr. Woods and the basketball coaches, Brian Zyrkowski (boys) and Greg Pedersen (girls), met to figure out how to move forward with where the teams would practice before the main gym opened again

The boys basketball program ended up taking morning practices to help accommodate more teams being able to practice after school. Youth feeder programs, like Jcats and Ladycats, also had to be factored in as well as the rearrangements were being made.

Mr. Woods added that he was amazed by the resilience of the coaches not being bothered by the closure.

“I mean wow, [Zyrkowski and Pedersen] never complained once, and we just sat down for about two hours and hammered out how to move forward,” said Mr. Woods.

The varsity dance team was scheduled to hold its first-ever dance invitational, the Wildcat Welcome, on Saturday, Nov. 23, in the main gym but this event was moved to the west gym instead. With 17 teams participating in the invite, additional seating was needed, so in order to make more seating available, there were outside bleachers brought in for the visitors to sit on.

Additionally, the closure also affected the wrestling meets on Nov. 23 and 26. The first meet was moved to the first bay in the field house and the second meet was hosted in the west gym. With the smaller size of the west gym, it made for a full house for the invite against the Grant Bulldogs.