Cancel culture: the good, the bad and the vitamins 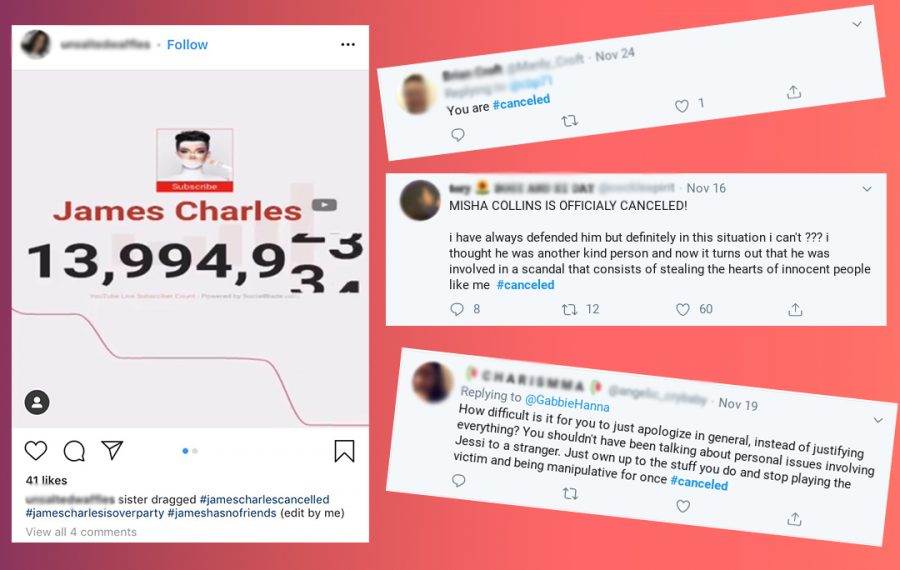 This past spring, unless your chosen place of residence was the underside of a sizable rock, buzz about the controversy between beauty YouTubers James Charles and Tati Westbrook most likely circulated on your social media feed. Sparked by Charles’s support of a vitamin brand in competition with his (now former) business mentor and friend Westbrook, a feud between the two illustrious makeup artists ensued.

Launching a volley of accusations at each other via videos on YouTube, fans of the two reacted by taking up metaphorical arms on Twitter and other social media platforms in an attempt to prove the righteousness of their respective “side.” Westbrook’s original video expose on Charles — which garnered more than 34 million views before it was deleted — painted the 19-year-old in an inextricably guilty light, and nearly five million fans of Charles unsubscribed from his YouTube channel in response. However, Charles shot back with a video of his own, using a plethora of “receipts” to prove his innocence, essentially putting an end to the ongoing controversy.

The James Charles situation is probably one of the primary examples that spring to mind for most when discussing “cancel culture,” and it is by no means unique in its frequency, especially on YouTube and Twitter, where it seems like a new person is added to the ever-expanding “canceled” list every other day. The term has largely been utilized to explain the fallout in the aftermath of these petty social media spats that have come to define the popular connotation of the phrase. However, cancel culture does rear its head outside of disagreements surrounding hair vitamins, and it is these scenarios — ones with real significance and impact — where we should be focusing our attention.

In 2017, comedian Louis C.K. was accused of sexual misconduct by multiple women in a report from The New York Times — allegations which he admitted to. Media backlash was considerable and his then-upcoming movie was canceled. Additionally, he took a year-long break from doing standup comedy. The trajectory of his incrimination was largely directed by the general public, which played a key part in the situation’s magnitude.

Situations such as this one displays the powerful effects and redeeming qualities of canceling, but they also bring up the confounding question of how to confront the art of someone who has been “canceled.” While some say it is impossible to separate art from the artist and that boycotting their work altogether is the way to go, others make the point that it’s acceptable to enjoy someone’s work, as long as you recognize that what they did was wrong and don’t openly support them.

In reality, the context and gravity of the situation should determine how you deal with the person’s content. For example, feel free to continue to watch James Charles, as he did nothing morally reprehensible outside of supporting vitamins. But in cases like Louis C.K.’s, openly supporting him and his work, especially after he admitted that the accusations made against him were true, has negative implications and is a form of enabling and forgiveness for his sexual assault. Choosing not to support someone’s work, especially if they’re already very successful, won’t have any monetary or “real” consequences, but it is a way for people to broadcast their personal statement about what we will or will not accept as a society.

On a case-by-case basis, cancel culture’s application is so different when comparing petty social media drama and large-scale controversy that it is impossible to make a decisive verdict on whether it is a positive or a negative phenomenon. However, “canceling” someone in cases of moral culpability is ultimately effective in stripping them of their platform and serves as a way to democratize the opinion of the general populace. If nothing else, we advocate that being cognizant in your participation in cancel culture is of ultimate importance, as your voice does have a considerable impact when added to the cacophony of public discourse.