The IceCats: Ups and Downs to being a club sport 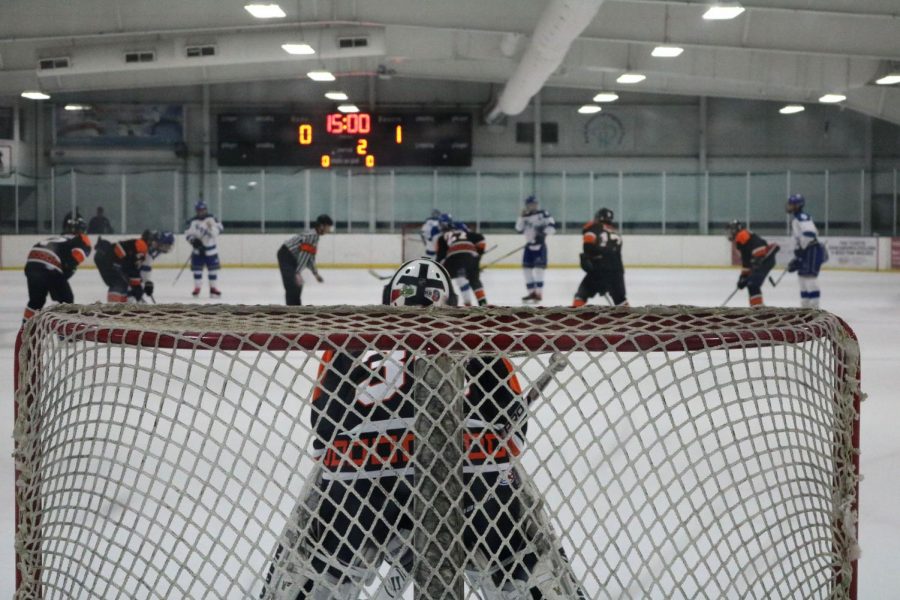 Imagine a Wednesday night after a long day at school: most students look forward to a night full of homework and relaxation. For the IceCats, though, these students go home and, instead of relaxing, they get ready for practice to start at 8:40 p.m.

The IceCats hockey team, which often practices late at night due to limited ice availability, is made up of a combination of Vernon Hills and Libertyville High School students. Neither school dominates the roster, as there are 12 players from Libertyville and eight from Vernon Hills.

Members of the team and its coaching staff believe this is of value to the program because talent can come from multiple places. In addition, these students value the friendships they form with peers from another school.

“We’re a really tight-knit group of guys,” LHS senior and returning captain Carson Darnall expressed. “We’re an older team, so we have grown up playing together over these last few years.”

Because these students are from different towns and due to the fact that hockey is a club sport, not one officially sponsored by the IHSA, many obstacles emerge. From driving from Vernon Hills to Libertyville before school for conditioning, to not getting a bus provided to and from games, to having practice while other students are already in bed, the IceCats must overcome many challenges throughout their season.

Despite these challenges, last year, the IceCats made it to the final eight in the state tournament. Their quarterfinal game went into overtime, but the IceCats ultimately did not come out on top. For Darnall, hopes are high for what this season might bring: “We have a fast team and have a chance at going far this year.”

There are nine seniors on this year’s roster, meaning the team has experience. After last year’s upsetting loss in the state tournament, these players say they are using this as motivation to go even further than last year. The IceCats first game this year was against Highland Park, and the teams tied at 4.

After a long day at school and a challenging practice, LHS athletes are able to go home, eat dinner, work on homework and go to sleep. But for the IceCats, they are just putting their equipment in their bags and getting ready to leave for practice. As players grow older, their time on the ice gets later.  Even after the IceCats practice, there is another practice for the adult league starting at 10:10 because Glacier Ice Arena is open until midnight.

So, for the Varsity IceCats, their time on the ice is 8:40-10:10 p.m. “By the time the guys get home and shower,” Head Varsity Coach Guy Considine added, “it takes some time to wind down.” This is Considine’s first year as the head coach, and his son Ryan Considine, a senior, plays on the team.

In the morning, when LHS athletes have practice, they generally work out in the same building as their first-period class. But, for the IceCats, about half the team is from Libertyville. So, after a morning workout at Vernon Hills, these athletes have to change, pack up all their stuff and drive to Libertyville before first period.

“For us being a club and in the same season as many other sports, getting the weight room after school was a challenge,” Considine said.

Due to the new push at LHS for athletes to go to the weight room twice a week for strength and conditioning, there is limited space in the weight rooms for a morning workout, for instance, the team starts lifting at 6:30 a.m. on some days.

Ben Wellenbach, founder of BeWell fitness, is the off-ice strength training coach who works with the team in the weight room so that they get stronger and in better shape for the season.  Because of the limited space, the IceCats had to adjust and now have added off-ice training days after school as well as at the BeWell fitness gym.

During their workouts, there are specific activities for the players to perform depending on their position.  For example, the goalies in hockey do things very differently from other positions. “[Goalies focus on] stretching,” said right wing Jack Waitley, a Vernon Hills senior. “You need to be really flexible to be a goalie and [have good] hand-eye coordination, being able to catch”.

Similar to every high school, LHS athletes have specific rules and regulations they must follow throughout their season. But, for the IceCats, they choose to hold their athletes accountable to the same standards as District 128 holds its student-athletes.

The district has a specific protocol for teams and athletes to abide by throughout their season. For example, each student must be passing five academic classes in order to participate. Considine believes in treating the players as regular student-athletes: “There is a high degree of emphasis that we are student-athletes, so students first, athletes second. That has always been a part of the program; we abide by all the grade policies and eligibility policies.”

Along with working with the high school on keeping their athletes accountable, the coaches also communicate with the trainers about injuries and work with them on concussion protocol.

Each year, LHS sports are budgeted a specific amount of money for their teams. But, for the IceCats, the program is not given an official budget due to its club status. This means everything is privately funded by the families. Even though hockey is listed under the “Athletics” tab on the LHS website, they are not given financial support for their season.

During official high school sports seasons, coaches can use their budget to buy an assortment of items, such as practice jerseys or new equipment. Without a budget, the IceCats must provide their own necessary equipment to compete. To do this, the team relies heavily on its wreath and holiday decorations fundraiser.  Not only do they raise money through this, they also have community sponsors and “chuck-a-puck” contests, where people pay and, in between periods, kids compete in throwing a puck to the middle of the ice to see which puck gets closest. This is a small way the team is able to fundraise money, and it invites the fan section to be more involved during games.

For away games, LHS athletes are supplied transportation. But, for the IceCats, all athletes need to do this on their own. “Instead of one bus with the team coming, you have 20 players trying to come 20 different ways and you’re trying to coordinate all of that,” Considine explained.

While this is challenging at times, Considine also believes that this is a good way for his players to learn and grow as people: “When you do get your license, you have to be on time and manage your schedule, and I think that those are all things that we need as we grow up.”

In the beginning of each season, LHS athletes are provided equipment. But, for the IceCats, they have to provide all of their own equipment with the exception of their jerseys and warm-up jackets, which are privately funded by the team’s families. The hockey team is required to buy the necessary pads, sticks and bags to hold all of their equipment.  All of this together can be very expensive; on average, Darnall estimates that each IceCats player spends around $1,500, depending on the gear the player is getting.

Although there are obstacles to being a club sport, there are still many advantages. “I think it is really fun to have kids from Vernon Hills,” senior left wing, LHS’s Nick Elfering, said, “because you get a whole different group of kids that I wouldn’t be able to interact with if I wasn’t playing on a combined hockey team.”

As a club team, they often travel farther and play against opponents that a high school team would not normally play, meaning it can be easier to reach out and meet new people. Also, since their home rink is not on school property and hockey is not officially recognized as an IHSA sport, this allows for high school fans to have more freedom at games and bring both schools together to show their school spirit.

“The Carmel game is always really fun; a lot of our students show up and have lots of energy making it a fun game with all the cheers,” Darnall said. “After goals in all of our games, our fans go crazy, which makes it super fun to play for.”