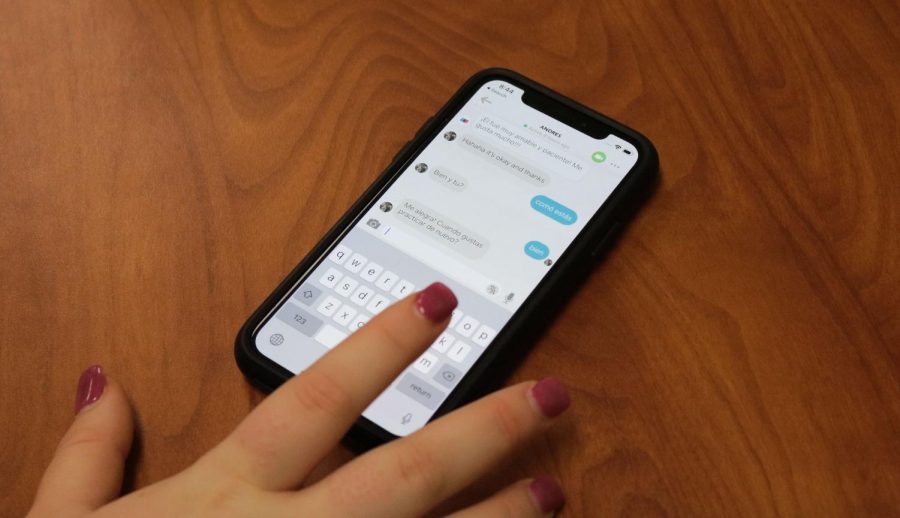 The app Tandem has been used by Spanish IV honors classes and has raised some concerns from parents and students.

Libertyville Spanish IV classes have introduced a new element to the standard curriculum to connect with native speakers from Spanish-speaking countries through an app called Tandem, which has been around since 2014.

The idea of using Tandem was brought to the attention of Spanish IV teacher Mrs. Emily Koerner by one of her students during first semester. The app allows people to connect with anyone around the world who also has an account on the app; its stated goal is to help users practice their language skills with native speakers.

The app had to get approved to be used by the LHS administration as standard protocol calls for. All profiles made have to be reviewed and approved by Tandem itself, which is based in Berlin, Germany, and the Spanish IV teachers checked all profiles as well.

During class periods when the app is used, the teachers bring the students to an innovative learning room in the school or to the language lab, a place at LHS where students in foreign language classes usually spend one day a week doing cultural and speaking-based activities, to talk with their partners on the app for 30 minutes. In those 30 minutes, they speak Spanish for the first half and English the second half. LHS students want to learn more Spanish and the native speakers want to learn English.

“[The app] doesn’t change our curriculum, but it enhances the curriculum and brings it to life,” explained Mrs. Koerner.

The Spanish IV teachers want LHS students talking with the same person on the app as much as possible to build the relationship between the two people but know that because of the time differences and not all of the speakers being in school, that’s not always going to work out.

“The relationship between the students and their partners are mutual, which is why the app is called Tandem because it’s always going back and forth,” Mrs. Schreck said.

The Spanish teachers have  acknowledged parents have shared their concerns with the administration and teachers about the usage of the app. Teachers have talked about the same concerns and want the students to be as safe as possible. The students have to send in screenshots of all conversations they have with their native-speaking partners in their weekly log, in case there is inappropriate behavior.

To avoid any other mishaps on the app, it has a block and flag feature that allows any user on the app to be reviewed by Tandem. The person can be blocked in the settings of the app and it automatically sends a notification to people at Tandem for the flagged content or user to be reviewed. The content could be inappropriate verbal or visual content.  In addition, the Spanish IV classes all received lessons on how to stay safe on the internet before the app was introduced.

Despite the issues that have arisen, the Spanish IV teachers are happy with the results they are seeing. Students are more excited to integrate the words they are learning and are getting a sense of how people speak Spanish on a day-to-day basis.

“It has helped me learned some Spanish slang and become more comfortable talking in Spanish,” Miller said.