The relationship between memes and depression 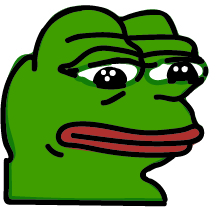 Pepe, pictured above, is a popular meme character who represents many things, his most prominent representation being his frequent apperances in depression based memes.

In recent years, memes have become a large part of popular culture. Merriam-Webster dictionary defines memes as “amusing or interesting items (such as a captioned picture or video) or genre of items that is spread widely online especially through social media.” They’re found on nearly all social media platforms in a variety of forms, from text posts on Tumblr and Twitter to images or graphics on Instagram. These posts cover a range of different topics, such as feel-good commentary about loving dogs or more serious concerns about corporate corruption.

Darker topics that memes can cover are depression and suicide. Freshman Bella Perkins recalled seeing an example of one of these memes over winter break: a text post that read along the lines of “should I hang the decorations or myself?”

Given that memes such as these exist, what connections, if any, are there between memes and depression?

As Dr. Nelson explained, clinical depression is a mental health disorder that is characterized by symptoms such as changes in appetite, loss of interest, changes in sleep patterns and a sad or irritable mood. She further noted that in teenagers, “irritability is actually the most common mood.”

While causes for clinical depression are “very hotly debated,” in Dr. Nelson’s words, she suggested that it is probably caused by a combination of a person’s environment and genetic tendencies toward depression. However, “little D” depression is caused by difficult events in one’s life or occurs when someone is “going through a rough time,” as Dr. Nelson said.

Furthermore, coping with a mental disorder such as depression is no easy task, according to Ms. Kara Bosman, a psychology teacher.

“While society is very comfortable talking about physical health, we shy away from conversations about mental health. Because of the stigma (the label of being ‘unacceptably different’) [for depressed people], it may be difficult to express struggles and get help,” she stated in an email. She added that our language can unintentionally extend the stigma when people with depression hear things such as “snap out of it” or “just try to smile.”

Even though memes can make people aware of depression as a problem in the world, their primary purpose is to be amusing or interesting, and not necessarily to be informative. Ms. Bosman stressed the importance of awareness and ending the stigma around depression in order to allow depressed people to find help, however she does not believe that memes are enough: “Memes are not providing the type of information needed to end the stigma.”

She did note that she had seen a few memes that included information about chemical imbalances in the brain that could lead to depression, but that’s not the majority of them.

Despite the different effects that depression can have on a person’s life, Dr. Nelson emphasized that it’s neither easy nor definitive enough to judge someone’s mental state only from what memes or posts they put on the internet. She explained that it would be difficult to assume that a person has depression judging solely from their activity online.

Though both Dr. Nelson and Ms. Bosman said that posts about suicide should always be taken seriously, jokes and memes about depression are not as easily figured out; they’re not concrete signs of a mental ailment in every case. To be medically diagnosed with depression, one must have five of the symptoms previously mentioned, according to Dr. Nelson.

While memes may not be definitive signs of depression in individuals, they may serve another role for people suffering from depression. According to a 2011 study by the Stanford Psychophysiology Laboratory, comedy is a more effective coping mechanism than being serious in the face of stress or sadness. Subjects were shown negative imagery of things such as car accidents and corpses and were then asked to “reappraise” the images by making jokes about them. The subjects that made positive jokes about the pictures saw the largest increase in positive emotion.

In some students’ opinions, memes can serve a similar purpose. Rather than trying to deal with depression solely internally and seriously, making memes and jokes about it could help alleviate the negative emotions it causes.

Perkins, who enjoys looking at memes every day, stated that “memes are like a mask used to cover up.” While it can’t quite make problems like stress or depression go away entirely, looking at memes can temporarily improve a person’s emotional state.

Anika Misra, a senior, who also looks at memes every day, supported this position: “[Memes] can kind of take your mind off of things, and for a lot of people, they’re a way to get your feelings out.”

In Perkins’s words, which correspond to the findings of the Stanford study and Misra’s opinion, “people use humor as a way to cope.”

She further pointed out that the relatability of memes about depression adds to the humor of the meme, so these memes can be even more effective for people trying to cope with depression. Perkins added that she doesn’t think that jokes about suicide are in good taste.

While the relationship between memes and depression is not easily defined, they might be able to help people suffering from depression cope at times, and knowing that others suffer as they do may help them to feel better about their state.

*Note: If you’re feeling depressed or have suicidal thoughts, please reach out to friends, family, your counselor, your social worker or another trusted adult.

Correction: This story has been updated to correct quotes and information from Dr. Brenda Nelson that appeared in the original version of the article online and in the February magazine version of this story. The article initially misquoted and incorrectly paraphrased Dr. Nelson when mentioning the different severities of depression. It should have referred to these as “big D” depression, the more concerning of the two, also known as “clinical depression,” and “little D” depression, which is when someone is going through a rough time.