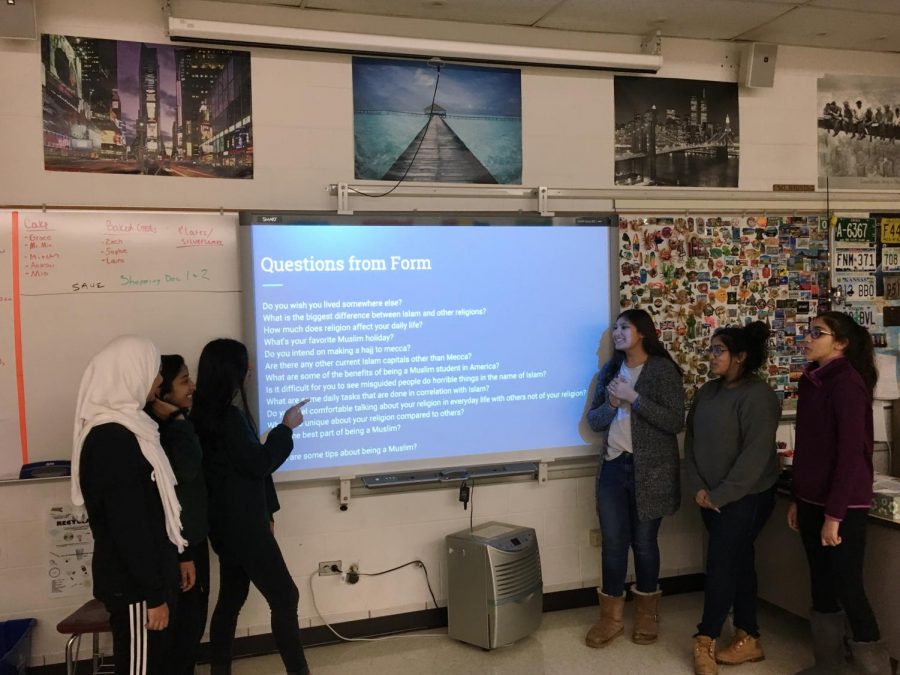 Members of MSA practice giving their presentation during a club meeting after school in room 225.

In the midst of their “Rise and Spread of Islam” unit, the LHS world history classes have  recently dedicated class time to debunking Muslim stereotypes, holding discussions and learning directly from presentations given by a few of their peers.

These were members of LHS’s Muslim Student Association (MSA) organization, who spoke about their encounters with and knowledge of Islamic stereotyping, as well as about MSA itself — what the club is, what meetings look like and other information about their involvement at school and in the community.

Mr. Matt Thompson, who teaches world history classes at all levels — regular, honors and AP — said that he was inspired by Mr. Kevin O’Neill, a fellow social studies teacher and the advisor for MSA, who previously had MSA present to his classes about Islam. Mr. Thompson emphasized how he thought “that it was a great idea to incorporate [presenters] into the curriculum instead of just me explaining elements of Islam.”

Mr. Thompson went on to say that while the students from some classes had more responsive questions than others, all of the students benefited greatly from the experience of hearing first-hand about the topic — it made it more real for the students to understand, he said.

In a separate interview, Mr. O’Neill reiterated similar points: “My kids loved it,” he said. “Talking to Mr. Thompson’s kids, same thing. Mr. Mix is requesting them to come to the classroom, so it’s really kind of becoming a thing that makes all the teachers inherently see the value of it, rather than having some old white dude who is Christian talk about it.”

In terms of the content of the presentations, Mr. Thompson was surprised: “[The presenters] didn’t talk about terrorism or unequal rights or things like that.” They discussed questions they’d previously encountered, one being “‘Does a woman — under her hijab — is she bald?’” and addressed new questions asked by the class — a “wide range of questions,” as described by Mr. Thompson — one being, “‘Do you play Fortnite?’”

Mr. Thompson continued: “I didn’t even know that was a thought or a stereotype, so it was interesting for me that they didn’t even think of the stereotypes that I typically think of.”

During a group interview with several members of MSA, Zoya Jafferbhai, LHS senior and club president, emphasized that “anyone is welcome” in MSA. “If you’re Jewish, if you’re Christian, anyone is welcome,” she explained.

Freshman Maryah Karim discussed the importance of MSA to her: while “Muslims are not really a majority here at LHS,” which is “perfectly okay,” she said, “it’s great that we have a club where all of us can come together … and talk about things that maybe you couldn’t talk about with your other friends.” She even provided some examples of questions the club has helped with: “During Ramadan, where to pray … or what do I do if I’m fasting and I don’t want to sit in the cafeteria, where do I go?”

Jafferbhai went on to describe another main role of MSA, explaining how they utilize “opportunities like bake sales or Feed My Starving Children or anything charity-based — we usually jump on that right away,” in order to raise money “to help people in need.”

Zaina Kagzi, a sophomore member, highlighted how the club also aims to help specific groups of people in need around the world: in addition to Syrian refugees — a group they focused on two years ago — they “picked the Rohingya people to raise money for” last year, another group of asylum-seekers.

Finally, the girls spoke about the presentations themselves. They all agreed enthusiastically when Karim described presenting as “very fun,” and when freshman Mariam Ahmed recollected everyone in the classes looking “super engaged [as we] we told them what our religion is really about.”

When asked about experiences with stereotypes specifically, Kagzi emphasized that “With the current news about ISIS and all the terrorist attacks, it’s really good to talk to your friends … about the stereotypes, since a lot of people hear the news and are scared about what the news has to say.”