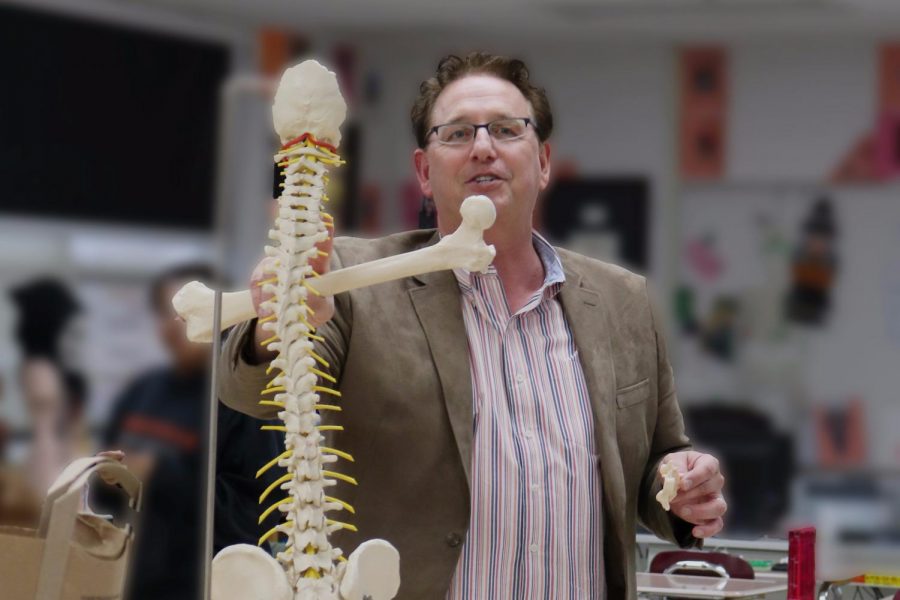 Mr. Kreutz uses models in his classes to indicate different parts of the spine.

Throughout the past century, many things have changed in the world, such as cell phones and cars, but one thing that has remained very much the same is the school system. Students sit in desks organized into rows and columns, listening to a teacher lecturing from the front of the room while taking notes. In the 1800s, there would be one teacher per schoolhouse with students ranging from kindergarten to 12th grade all in the same classroom. The teacher would lecture and the students would take notes on slates with chalk. While the world now may be more technologically advanced, the same basic structure is still present in many of our classes.
Some teachers remain very traditional with their teaching styles, while some are evolving their methods and becoming more modern. Their curriculum has begun to shift to allow for open discussion and encourage more questions and curiosity. With these new methods, students are able to explore their classes and alter them to their interests. Teachers are adapting to different students’ learning styles and consequently changing their lessons and activities.
A study from the Proecdia — Social and Behavioral Sciences journal in 2011 looked into whether or not a student’s learning style affected their academic success and whether or not the teacher’s teaching style affected the students. It concluded that “a good teaching method is the one that implies relevant and visible training values which shall motivate students and make them aware of their understanding and reflection, [and] help them make up their critical thinking which will guarantee their trust in their own forces. The students then become more capable of acquiring the skills necessary to become successful in the future.”

Joesten
One teacher who has transitioned into an alternative teaching method is Ms. Christee Joesten, a math teacher who has taught at Libertyville High School for five years; she has developed a new curriculum for her precalculus course.
Her variation of this old course is taught based upon what she refers to as the four C’s: creativity, critical thinking, collaboration and communication. These four fundamental topics help students solve open-ended questions that Ms. Joesten has not explicitly told them how to do prior to them solving the problem.
“[The goal is to] solve something where I haven’t told them how to solve it so they have to be creative and use critical thinking,” she said.
Ms. Joesten’s inspiration to change the way she taught and to develop this new style was from a video that she saw, which was produced by XQ America and the XQ Super School project. The design of this project was to reimagine high school and the way that students learn.
Ms. Joesten used her inspiration from the project to create a new way to learn precalculus in order to keep students interested and engaged. One way that she has redesigned her class is by allowing the students to have more interaction with each other and engage in hands-on learning, which isn’t always typical in a math course. Typical math courses follow the structure of students listening to the teacher lecture and taking notes, practicing repetition and solving the same types of problems in order to retain the information.
For example, one day in class Ms. Joesten might say, “We are going on a hike and I have my backpack, and in that backpack I have measuring tape and compasses, and we walk around school and I bring them out to the courtyard. I say, ‘You have to only use the tools in my backpack and you have to figure the distance from where you are standing to get to the tree.’” This type of activity is designed to allow students to come up with creative ways to solve the problem. The students are not allowed to ask Ms. Joesten for the answer or how to solve the problem. Without being explicitly told the solution the students are forced to come up with it themselves. Ms. Joesten believes that this helps better prepare students for their future.
This isn’t the way math classes are typically taught, and from Ms. Joesten’s experience, she has noticed nothing but positive improvements from her students. According to Ms. Joesten, students are performing at such high levels, and they are way more motivated.
Joesten has also noticed a change in the way that students act during math. They seem more confident and less stressed during class.
“This class has changed me as a student,” said Christine Zhang, a junior enrolled in one of Ms. Joesten’s classes. “I feel more confident in my math skills and less nervous about making mistakes because I know that I can always improve my score. I’m less afraid of failing, and I’m more comfortable asking questions on why I got something wrong.”
Another aspect of Ms. Joesten’s precalculus class that is different is her grading system. Students do not receive a grade on every assignment that they complete. Ms. Joesten believes that when she gives students a grade, it doesn’t show them what they can do better; she said it is more helpful to have written feedback. This written feedback allows a conversation between the student and the teacher and provides the student with what they can do better and how they can improve.
Due to the fact that students do not receive a grade until the end of each progress period, the written feedback provides them with time to understand the material and have a better grasp on the concepts, possibly by going in for extra help, which could allow students to receive a better grade at the end of each quarter and, in turn, a better overall grade in the class.
One of the major changes to Ms. Joesten’s class and quite possibly the base of how the whole class is designed, according to Ms. Joesten, is the individual website that each student creates. The students set up a website where they upload different assignments and problems that they have worked on throughout the progress period. They then also provide Ms. Joesten with the grade that they believe they deserve. The students base this grade off of how well they did on each of their assignments and on how well they believe they understand the material.
Students must provide evidence for the grade by relating it to the four C’s mentioned earlier. Ms. Joesten has been quite surprised by the success of having students grade themselves. She has found that students are “incredibly honest about the grade that they deserve. I haven’t had to have [many] one-on-one conversations about the grade that they deserve; our opinions typically match up.”

Kreutz
Mr. David Kreutz is currently a human anatomy and physiology teacher at LHS, but he has been teaching here for 12 years and has taught biology, chemistry, honors biology, physics, physical science, and chemical research and development in the past. Prior to LHS, he taught at Burlington High School in Wisconsin for 11 years.
Mr. Kreutz said his teaching philosophy “begins with the understanding that all students are unique and must have a stimulating educational environment where they can grow physically, mentally, emotionally and socially.” He believes that a teacher should be a facilitator or a guide in learning, and that students should “let their curiosity direct their learning.”
He continued on to say, “Students cannot learn if they are anxious, intimidated, frightened or in some personal trauma.” So, he tries to keep an “intellectual but entertaining” classroom environment “of collaboration and openness.”
There is no “normal day” in Mr. Kreutz’s classroom. He described having the same schedule for each lesson as watching the same movie over and over again.
“I try to keep each day interesting and exciting for my students and myself,” he said. “If I’m bored teaching the lesson, how will my students feel or react to my instruction?”
His students respond well to his methods.
“It’s very loosely taught, but you learn all the information,” said Jessica Fu, a senior at LHS, currently enrolled in Human Physiology and Anatomy with Mr. Kreutz. “You learn by hands-on experience and you learn by what you know, and it’s not him teaching you all the time; it’s having you figure out things by yourself and then getting the feedback from that too.”
In preparation for being interviewed for this story, Mr. Kreutz asked his former students, through social media, about his teaching methods. He said that one of his former students raved about how Mr. Kreutz was more interested in the students themselves and whether or not the students were enjoying learning, rather than being worried about grades. Other students recalled how interesting his class was and how engaged they were during his class.
While Mr. Kreutz does admit that some students don’t like his teaching methods, for the most part, he said he gets very positive feedback.
He added that his classes are full, and he said he teaches the way he does because “kids tend to respond to it and they work hard for me. When I need them to do something, they do it. I’m pretty relaxed in class, but they totally know when I need them to do this or that or whatever.”