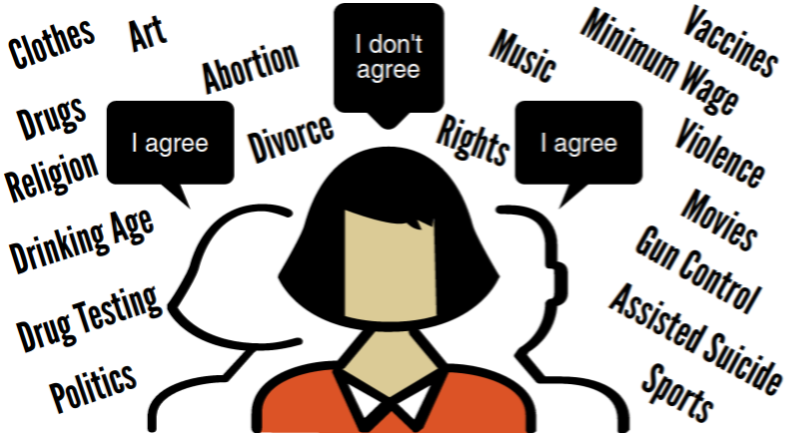 Many choose not to speak their opinion if the majority doesn’t agree with them because an argument may arise; but there are a select few who will speak out.

I’m sure every one of you reading this right now has held an opinion on a situation or event that somebody else disagrees with. It is common nature to have disagreements, but the frustrating thing is when you are one of the few that has a differing view.

From music to art to sports, there always seems to be a majority opinion. Take, for instance, how many people say they really enjoy country music. If I was surrounded by a lot of country music fans, even though I don’t prefer it, I’d most likely say, “It’s okay.”

The “Spiral of Silence,” originally created by German political scientist Elisabeth Noelle-Nuemann in 1974, is the idea that people do not want to give up their own interpretation of a situation and they in turn conform to the majority opinion in fear that they will be singled out.

A lot of times, it’s my own understanding that people fear voicing an unpopular opinion because they feel as though there is no way the person or group they are discussing with will listen to them or change their mind on the topic at hand. That is what is frustrating about people these days, especially during the turbulent election season (I’m not innocent either on that front, at times). Most people get so confident and aggressive with their own opinion around others that agree with them that they fail to listen to differing opinions.

Now, even though unpopular opinions can be about anything, the most intense ones are often related to politics. I have experience with this because as a more conservative-oriented individual, I have many beliefs that a majority of the people in this school don’t agree with. As someone with a few unpopular opinions, everyone in the majority knows who you are because your viewpoint is the complete opposite of theirs.

My experiences in AP Government during first semester were prime examples of this feeling. During the long and tumultuous election season, there were many heated — yet civil — debates that took place. I was one of the few people that supported President Trump, as well as most of his values and beliefs. I wrote a story in the November “Political Issue” of DOI on why I supported Donald Trump for president, an unpopular stance in our school. I took a lot of heat for this stance and at times, it was hard to voice my opinion knowing the possible backlash I might receive.

Now, that isn’t to say that having a dissenting opinion is always a good thing. It is the way that you convey your opinion that really matters because coming off as arrogant while having a not-so-popular opinion will not bode well for you.

For those who have the majority opinion, listen to others. You may find that someone with a different opinion might say something you agree with. Now, of course, that won’t automatically change your stance drastically, but there could be a point that you may find true, and it could change your perspective of that side of the issue. Those who are open-minded are the best kinds of people because they allow the unpopular opinions to be heard.

These opinions, which a lot of times are not expressed, need to be heard. No matter if they’re about how a sports team’s future should play out or how great a song is, they are a vital part of society. Take a listen to them sometime; they may surprise you.